Exactly one week and one day ago our little guy came into this world. It seemed time crept slowly the weeks and days before as we anticipated his arrival. Now that he is here, each hour flies by and I already find myself reminiscing about when he was younger and smaller.

I then spent about an hour and a half or so in a warm bath. At that time the contractions were much like the strongest menstrual cramps I had ever experienced but completely tolerable. Dana began timing them and we ascertained they were anywhere from 6 or 7 minutes to 10 or 12 minutes apart. We decided we would wait until 6:00 A.M. to call our doula.

At 6:00 A.M. Dana called our doula, who returned a day early from her Thanksgiving vacation because she thought I might go into labor Thanksgiving weekend and wanted to be here for us (she did have a backup doula lined up.) We were so thankful for our doula's early return because she was such a great part of our successful birth. Our doula arrived at our house around 7:30 A.M.

My contractions began growing more intense and a bit closer together, although not completely regular and varying between 3 minutes and 6 or 7 minutes. Our doula said this was completely normal. We spent most of our time in the den, and with each contraction I would lean over the back of the couch or sit on the birthing ball while Dana and our doula rubbed my back.

At 11:30 A.M. Dana and our doula decided we would assess our departure for the hospital around 12:00 noon. Shortly after 12:00, our doula decided it was time for us to go to the hospital, especially since I was Group B Strep positive and had to get a round of antibiotics a few hours before delivery. At that point, I was ready to go.

Once in the car, I climbed in the back seat with a few pillows and put on my headphones to listen to one of my hypnobabies CDs. The ride to the hospital seemed excruciatingly long. Once at the hospital, I was quickly sent to triage to be checked. The nurse ascertained I was 6-7 cm dilated and I was immediately admitted.

Once in the labor and delivery room, our doula gave the two nurses our birth plan. In the end, both the nurses were wonderful. However, at the outset one of the nurses, Daniella, seemed a little curt. She insisted on an order from the doctor to allow me to labor in the tub or to walk around. The doctor of course consented so there were no issues. We learned later my labor that Daniella was in midwifery school and completely supportive of natural childbirth. In the last minutes before Miller's birth, she was greatly supportive.

One of the nurses inserted an IV in my arm and started the antibiotics for Group B Strep. I was then able to get into the bathtub where I labored for the next few hours. Dana and our doula took turns spraying warm water on my back. After about an hour, the IV was taken out and a hep lock left in my arm. I continued to labor in the tub. Probably about 3:00 I wanted to get out of the tub. I was beginning to get very uncomfortable and I even once asked "remind me why I want to do this without an epidural?" Daniella responded "because it will be a great experience."

Once out of the tub I sat on the toilet, which seemed comfortable for a short period of time. Once I sat down, I felt what I describe as a water balloon popping and then a gush of fluid. I looked down and the fluid was discolored. My water had broken and it was confirmed that Miller passed meconium in utero. This meant that I would not be able to hold him directly after the delivery because he would need to be assessed by a special team and suctioned to ensure that he did not ingest any of the meconium. Although our birth plan contemplated Miller being placed directly on my chest, we of course only wanted what was best for the little guy.

At some point shortly thereafter I have to admit I began asking for some pain relief. Our doula suggested the nurse check me to see how much I had progressed and I agreed. I climbed into bed. The nurse checked me and told me I was 8 1/2 to 9 cm dilated. I again asked for some pain relief. I remember looking up at Dana, our doula and the nurses but no one seemed to respond to my request. I have no idea how much time passed, but the next thing I really remember is Daniella announcing I was complete and could push.

I began to push and pushed for about 20 minutes before the on call doctor arrived, who had been delivering another baby. I do remember the nurse preparing to deliver the baby because it was very possible that the doctor would not be able to make it in time for the delivery. The pain at this point was entirely different but I can say my body knew when to push. I pushed for what I am told was an hour but time seemed to stand still. I remember watching Miller come into this world and then being taken to a station in the room to make sure all was well. Dana was with him and within a few minutes, he was on my chest. Our doula helped me with his first latch and he immediately began breast feeding.

Any discomfort and any pain have been fading from my memory day by day. Without a doubt I would do it all over again and I would not change a thing about Miller's birth. It was one of the best days of my life.
Posted by LKC at 2:42 PM

what a beautiful story. thank you so so much for sharing it. it sounded like a truly magical experience.

Just absolutely beautiful!! THanks for sharing it!!

I have so many tears of joy for your and your family. Congratulations darling. It's been such a blessing to have you share this entire process with us.

This is a beautiful birth story indeed. Congratulations!

Such a beautiful story - thank you for sharing!

Such a wonderful, beautiful story. I hope that our birth goes in a similar fashion.

I have chills. He is such a beautiful baby and Apes and I can't wait to meet him. :)

Blogs You Should Visit 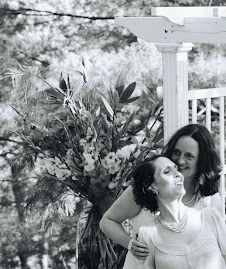 LKC
Charlotte, North Carolina, United States
My partner and I met in the summer of 2005 and from that moment, I knew this was the woman I wanted to spend the rest of my life with. On May 19th, 2007 we held a commitment ceremony in the North Carolina mountains. Now we're ready to have a baby.